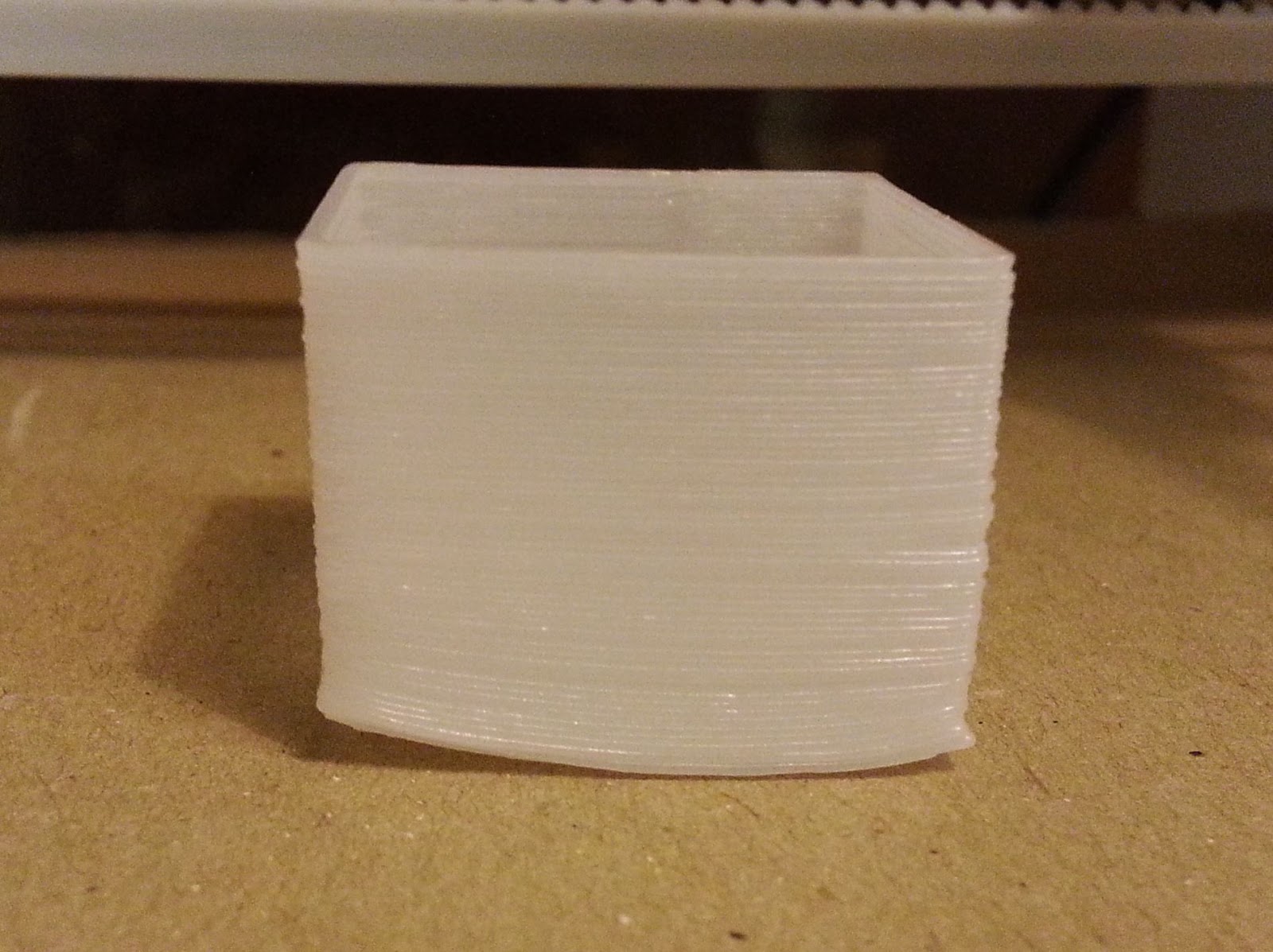 So, you’ve started 3D Printing, and if you’re like me, you start with PLA. Let’s just take a quick moment to appreciate PLA and all of its benefits:

However, after you’ve printed for a while, you’re bound to want to give something else a try: ABS. I mean, LEGOs are made out of ABS. It can’t be that bad, right? But then you go ahead and print something fairly large, and this happens.

Before I begin, a quick disclaimer. I am in no way responsible for any damage that may happen to your printer if you follow any of my tips. However, I don’t really think that anything bad will happen, as long as you don’t spill the acetone or something else while your printer is on.

First, GET A HEATED BED. It’s entirely possible to print ABS without a heated bed, but it’s just not worth the effort. If you don’t already have a heated bed, get one. A heated bed helps keep the base of the model at a constant temperature to resist the uneven cooling that causes ABS to warp. ABS shrinks when it cools, so uneven cooling=uneven shrinkage=WARPING! The optimal temperature is about 110°C. However, my heated bed doesn’t actually go that far, and I’ve found success with 85°C.

Next, attempt to reduce air currents. Air currents can contribute to the uneven cooling of the print too. The easiest thing to do is to reduce the fan speed on your hotend to about 30% MAX. It would probably be even better if you turned it completely off. Another method is to build an enclosure around your printer to prevent other currents around the room from interfering.

Some other general tips are to try changing your build surface. Kapton/PET tape generally works well with ABS and leaves a nice shiny finish on the bottom. Also, make sure your bed is level and adjust your bed offset to make sure that the first layer is getting enough squish onto the print bed.

If none of that works, it’s time to stick the ABS to the bed with BRUTE FORCE.
First, try hair spray. Just take some extra-strength plastic based hair spray that you might find in your house and spray your print bed down. It never actually worked for me, but others have reported success. It’ll probably work for you because I didn’t actually use hair spray, just this kind of gel. There are some things to consider when using hair spray though:

Another commonly used method are glue sticks. Basically, you apply glue to the bed where your part is being printed. I haven’t actually tried this on ABS, but it seems to work well for PLA on a glass bed on an Ultimaker 2. It’s similar to hair spray in function, but applies to the bed differently and it doesn’t smell bad.

Finally, the only real method that worked for me is something called ABS juice. It’s a mixture of ABS and acetone, because ABS dissolves in acetone. It’s applied on the bed and forms a nice adhesive layer of ABS when the acetone evaporates off of the bed. However, acetone can be very dangerous, as it can be toxic and very flammable. BE CAREFUL!

Again, be careful when handling acetone. To make it, first make sure you’re using a plastic or glass that doesn’t dissolve in acetone (all glass should be fine). Then, mix acetone and a bit of ABS. Really, you don’t need all that much ABS. Best results come when using the same color as the ABS you’re printing or uncolored ABS, unless you want another colored finish on the base of your print.

Hopefully, this helped you with printing ABS, but above all, be safe.